The Buddy effect: improving mental health treatment, one pet at a time 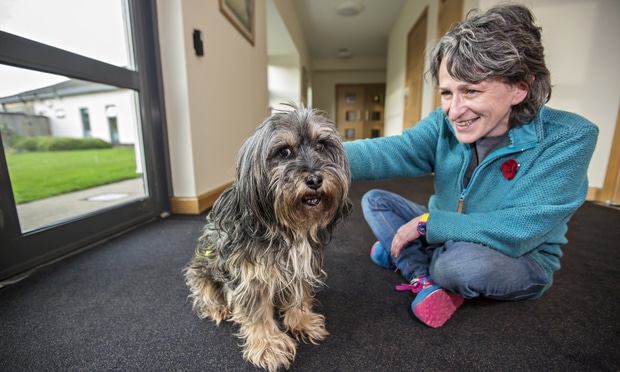 Everyone should have a Buddy. When Buddy enters a room, everything automatically lights up. Buddy exudes charisma. Buddy is the life and soul.

Buddy makes everything better. No matter the situation, nothing fazes Buddy. I wish I was more like her.

Buddy is a Tibetan terrier, and one so unstoppably adorable that I genuinely don’t know how anyone manages to meet her without abducting her. And I’m not even her biggest fan. I’d probably struggle to crack her top 100.

Buddy’s owner, Marion Janner, knows exactly the effect that the dog has on people, which is why she’s been promoted to the role of unofficial Star Wards mascot. In a field often portrayed as bleak and helpless – the field of mental health – Buddy represents positivity.

Star Wards – one of this year’s nine Guardian/Observer Christmas appeal charities – was set up eight years ago, after Janner was sectioned with borderline personality disorder. “Being sectioned was soul-destroying – soul-annihilating, actually,” she says. Part of Janner’s frustration stemmed from her issues with the hospital staff, who – despite their good intentions – appeared underused and crippled by overzealous governance. This observation compelled her to write a list of all the little things that could have been improved in her ward. Nothing huge – making sure that all the board games had the correct pieces, encouraging patients to support each other – but enough to run to 65 points.

As a campaigner, a former community service manager and a full-time mile-a-minute dynamo, Janner felt obliged to do something with this list. So she emailed Louis Appleby, the then national director for mental health. Fast-forward a few years and her list of practical, low-cost changes – christened Star Wards – is being implemented in about 80% of the country’s mental health wards.

Though less than 5ft tall, Janner has enormous presence. Meeting her, trailing a dog and a giant Tupperware-rammed rucksack in her wake, you’re immediately struck by the sense that Janner is irrepressible. More than that, she’s a force of nature.

“She’s my hero,” says Ellie Walsh, senior operations manager for acute mental health services at Harrison House, an inpatient facility in Grimsby, Lincolnshire. Walsh first saw Janner expounding the Star Wards principles at a conference in 2006, when Grimsby’s mental health facilities were all located in a rundown Victorian hospital. Harrison House, on the other hand, is an airy, plush, well-equipped facility built four years ago and tended to by former patients trained as part of its Tukes employment scheme (Tukes won a Guardian public services award in 2011). As well as their rooms, patients have a cafe, a mixed and same-sex lounge and a selection of relatively discreet seating areas where they interact with staff and each other.

Every morning starts with a coffee group, where patients and staff choose what they want to do that day. Four times a week the patients go out and buy ingredients for their evening meal, then prepare them. The staff and patients eat these meals together, at the same table. NAViGO, the not-for-profit social enterprise that runs Harrison House, ranks highly in both staff and patient satisfaction. Walsh built Harrison House with Star Wards protocols in mind.

What makes all of this remarkable is that Star Wards is just a two-person team, consisting of Janner and healthcare assistant Nic Higham. The take-up has been so huge, Janner thinks, partly because Star Wards is free to join, but also because the changes are offered as a series of polite suggestions rather than direct orders. This way, staff aren’t immediately filled with resentment because they’re being forced to kowtow to another faceless diktat.

Staff are encouraged to take ownership of the suggestions. They can cherrypick whatever they’d like to attempt from the list – there are now more 1,000 good practice ideas on Wardipedia, an online resource with sections on everything from considerations for LGBT (lesbian, gay, bisexual and transgender) patients, to the importance of Nintendo Wiis, all written in Janner’s trademark conversational manner.

Janner is effusive about the importance of satisfied staff: “I’d rather be treated in a trailer by great staff than in a palace by bastards.” This is reflected in her attitude towards Star Wards, particularly its staff validation scheme. If staff feel a sense of ownership over the small changes that Star Wards suggests, she says, they are more likely to go the extra mile. Healthcare assistants, for example, routinely bring things in from home to improve the patients’ quality of stay. And this extends to non-clinical staff, too. Inspired by Star Wards, a receptionist at a different facility has just started volunteering her time by holding a regular drama club.

Which brings us back to Buddy. Janner’s way of going the extra mile is to take Buddy with her to every hospital she visits. Animals, along with the internet, are one of the best additions to a mental health ward. Taking a dog like Buddy to visit people with mental health problems is a masterstroke – Buddy is tactile and appreciative. She motivates patients to exercise and to act responsibly. She implicitly trusts everyone she meets, which can often be the first instance of trust that some patients have encountered for years, especially at high-security facilities such as Broadmoor. There is even evidence to suggest that having a dog around heavily reduces instances of self-harm.

Unlike Switzerland, where one facility has a therapy dog in every ward, there are currently no dogs in residence at any UK hospitals. This, you sense, is the next thing on Janner’s list; the next tiny, yet enormous, step in improving inpatient mental health treatment in this country.

Make your donation to the Guardian and Observer Christmas Appeal 2014